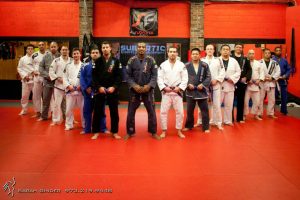 Brazilian Jiu-Jitsu: Brazilian Jiu-Jitsu is an equalizer, allowing physically smaller fighters have an advantage over larger opponents. Nearly all matches end up on the ground, and mixed martial arts has incorporated this into its fighting technique, or, as Wikipedia puts it, “[BJJ] has since become a staple art and key component for many MMA fighters.” It’s important to be comfortable on the floor, to know how to chain attacks that can allow you to come out on top of a situation.

Muay Thai: While Brazilian jiu-jitsu takes care of the keeping of someone in place to get a submission, Muay Thai is there for the striking. It’s known as the “art of eight limbs” because you have two each of hands, elbows, feet, and knees. Because you’re allowed to use all eight of these as weapons, you’re covering short, medium, and long range attacks. Muay Thai can also include throws.

Put these two disciplines together and you’ve got two of the core components of mixed martial arts. Which should you choose first? Give us a call to arrange a viewing or use our offer of two weeks free. Find your martial art here!