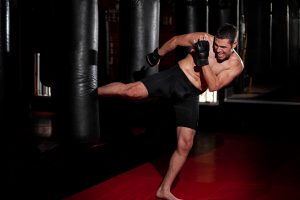 We recently talked about some of the gear you need for Brazilian jiu jitsu and for mixed martial arts training. Most recently we talked about the gloves, clothing, and guards that you will want to invest in if you are interested in becoming the best MMA fighter you can be.

No doubt, there are many pieces of gear you can buy, and some are more important than others. Here are a few more pieces of gear that you won’t want to be without during your mixed martial arts bouts.

Mouth Guards: If there’s one piece of gear you don’t want to be without, it’s a mouth guard. While people in the movies are constantly getting teeth knocked out without much concern, it doesn’t show the following weeks where they go to the dentist, have a socket screwed into their jaw, and have to wear dental implants for the rest of their lives. Take care of your teeth! It’s hurts enough when you get hit in the face, so you don’t need to add “dentist pain” to the list.

Cups: Not much to say here. If you need one, you need one. Because even if it’s illegal to get kicked between the legs, that’s not much consolation when it happens.

Mats: We’ve got all the mats you’ll need when you’re here for MMA training, but when you want to work out at home there’s nothing like having your own sparring mats so that you can get in some more fight time and practice.

Grappling dummies: Speaking of mats, what do you do when you’ve got the space and the mats but no one to grapple with? Grappling dummies can be great for both mixed martial arts and for Brazilian jiu jitsu, allowing you to practice holds, throws, and punches without the fear of hurting a human. They’re nice and heavy, too, so they can be a great way to work out your muscles while you work on your moves. Some are human shaped, some look more like punching bags.

Headgear: Many of the MMA fights you’ve seen are done without headgear, but that doesn’t mean that the professionals aren’t wearing them when they’re practicing. Headgear prevents injuries while you practice. You don’t want to have to cut your practice short just because you need a trip to the emergency room!

There you have it, the bulk of the equipment you’ll need when you’re engaged in mixed martial arts training. It’s becoming obvious that there are quite a few more pieces of equipment that you’ll be needing for mixed martial arts than for BJJ. But don’t let that sway you too much…after all, it’s better to spend a bit more on MMA gear if MMA is really what you’re interested in. As they say, the best exercise is the exercise that you’ll actually do!

When you come in for your trial class, don’t worry too much about the equipment. Let’s find out if MMA classes are for you, and then you can start grabbing the gear. Check out the schedule today and give us a call at the number above!