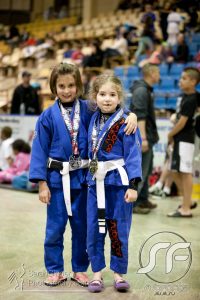 We recently blogged about the minimal amount of equipment you’ll need for a Brazilian jiu jitsu class. But what about mixed martial arts training? What kind of equipment will you be needing for MMA?

Well, there’s a lot more, that’s certain! Here’s a primer on the stuff that you need and some stuff that can be very useful..

Clothing: You won’t want to wear just any clothes to a mixed martial arts class. MMA shorts allow for a large range of motion but won’t flop around on your legs. They most often have both an elastic waistband and a drawstring, because you don’t want them coming down as you’re moving or when you’re grappling with an opponent. They’re also tough so that they’ll stand up to years of training (and washing!). You can also wear a gi during class that will consist of pants and a jacket.

Gloves: Gloves are a necessary part of MMA training. They protect your hands and the opponent’s face, and are a great way to deflect blows to your less protected parts. MMA gloves are smaller than boxing gloves and allow the fingers to be seen and used.

Guards: Guards can play many different roles. Shin guards are pretty obvious…there’s no fat or muscles on your shin and it hurts like mad to get hit there. Knee and elbow pads also protect you, but will lessen the impact of strikes during practice so that your opponent isn’t hurt.

Those are just a few of the pieces that you’ll have on your body during mixed martial arts training. Next time we’ll let you know of some more equipment you can use in MMA. If you think you’re ready for classes, contact us here.