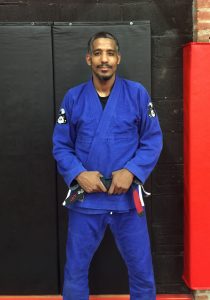 Is it a martial art? Yes! Brazilian jiu-jitsu has its roots in jiu-jitsu, a Japanese martial art that was originally used as a form of close-form combat against Samurais. Because striking an armored samurai would put one at a disadvantage, jiu-jitsu employed locks, pins, and throws. Brazilian jiu-jitsu advanced this idea by moving the combat to the ground. When this happens, someone experienced in ground fighting has a clear advantage and can then employ joint locks to get the submission. Speaking of submissions…

Is it a sport? Yes! The martial arts side was developed so that a practitioner could have an advantage over someone who wasn’t experienced in ground fighting. As a sport, two trained fighters spar, so it becomes more complex…the simple moves won’t work! So Brazilian jiu-jitsu definitely becomes a sport of the mind as well as body, as each lock or pin must be chained and countered in order to come out on top.

There’s no doubt that Brazilian jiu jitsu is an amazing world class martial art. But it’s also a beautiful discipline and sport that’s amazingly fun at the same time. Check out our schedule to see which class will work best for you.