The common perception of a black belt martial artist is that they are masters of pugilism. Unfortunately, NOT all martial artists can actually scrap.

Who, or what, is to blame for such a shocking epidemic? Perhaps, it’s in the delivery system of the information and the methods used in class. I have been to classes where student A throws a cooperative jab punch, leaving it out there for student B who displays an exotic, parry, back hand parry to wrist grab, back fist to cheekbone sequence of destruction. It feels smooth and looks great. It awes onlookers and yourself. A surge of confidence erupts and your inner master is activated. You repeat these sequences and patterns for months, years. You accumulated so many  sequences over time. You have complex solutions for a jab, a cross, a front kick. You know these rehearsed patterns better than your own native language. You are so ready. Your chin is up, chest pokes out, shoulders rolled back. You my friend… are a bad ass. 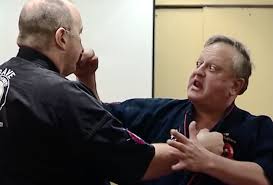 But then one day a person bumps into you on the street, wreckless eyeballs you and proceeds on their merry way. The confident master in you says, “Hey! Watch where you’re going next time!” A verbal dispute quickly ensues and now you’re in a fight… a REAL fight! You get into a firm kung fu stance, even though you’ve only ever trained Tae Kwon Do. “What the hell am I doing?” you ask yourself. But it doesn’t matter. You’re a black belt. You’re a master. So you issue the stare of despair. Your unlucky opponent balls up their fists and puts their dukes up. You scroll through your mental weapons catalog. If they throw the jab, you’ll do sequence C… yes! No, maybe Sequence 4A. But what if they throw the cross? No problem. You’ll catch the cross, twist the wrist, and break the elbow with a downward spike elbow, perfe… BLAO!!!

You just got decked in the face with a wild, perfectly placed overhand , dropping you to the ground. Your last thought did not even register because chaos is ensuing. You are mentally lost. This is UNFAMILIAR territory to you. You see hazy clouds and a looming blackness. You get punched, kicked and choked to unconsciousness.

Your former training partner caught the last part of the fight, just before the knockdown. They used to train with you but decided on trying out a Mixed Martial Arts program that offered boxing, kickboxing, wrestling and brazilian jiu-jitsu (you know… all the things you didn’t do in your street fight). Is it a coincidence that those arts are the primary arts for World Class Mixed Martial Artists today? It is a coincidence that these arts are designed to be functional, forged by the battle, by the fight? You may start to ask yourself how does one develop real world, real time, martial art skills? The answer is simple. By practicing against resisting, and uncooperative training partners.

Your Martial Efficacy for self preservation is dependent on training as realistic to the proverbial street fight as possible. If becoming a functional martial artist is your goal, then you will get there through sparring, grappling (with and without strikes), clinching, weapons training, and learning to deal with multiple attackers. There is a time and place for drills and cooperative sequences for sure, just not 99.1% of the time.  The same applies with training for Sport competition!   The goal is being able to apply what you know when it counts.

Nothing can replicate an altercation in the street other then being in altercations in the street, outside the club, in the parking lot, with a person threatening and yelling at you.  We can only hope that our awareness and cylinders fire as best as possible when things hit the fan.

A street fight is chaotic, unpredictable and emotionally compromising. Are there weapons involved? Multiple opponents? We will not know this in advance. We do not know how our opponent will attack us.   True Martial Artists seek out the truth of combat in combat. No patterns, no choreography, just unpredictable, in the moment, problem solving within chaos.